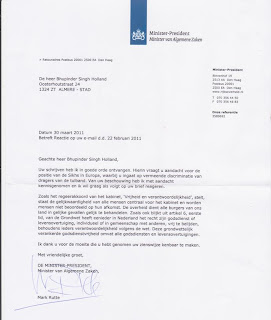 An advocate for Sikhs in Holland Sardar Bhupinder Singh  recently wrote to the Prime Minister of Holland Mr. Mark Rutte to highlight the concerns for Sikhs at airports

Bhupinder Singh said in his letter that Sikhs and other religions are well protected by law in the Netherlands, in the hope that other countries too will bring this issue to focus, as the pain felt by Sikh when their dignity is compromised at airports is causing grave concern.

The Prime Misters office wrote back and said  'I have received your letter in good order. You have drawn my attention to focus on the position of the Sikhs in Europe, you respond to alleged discrimination against wearing of the turban. For your consideration I have carefully considered and I would like to respond to your letter as follows.

'As the coalition agreement of the Cabinet, "Freedom and responsibility," says,
The equality of all people is central to the government and people are not judged by their origins. The government  include all citizens of our country in similar circumstances and are treated equally.

'As is clear from Article 6, first paragraph, of the Constitution, everyone in the Netherlands have the right of religion or belief, either individually or in community with others, to profess freely, without prejudice to his responsibility under the law. This constitutionally enshrined freedom of religion encompasses all religions and beliefs'