British Sikh, Shaminder Puri, appeared in a Warsaw court at the end of October as part of an ongoing dispute with the Straż Graniczna (Polish Border Guards) over being forced to remove his turban.

Mr Puri claims he has now become a victim of harassment after bringing the incident to the attention of Polish officials.

"I became a particular target; the soldiers got to know me and heard I was writing letters to head office. Soon after, they started to harass me," claimed Mr Puri.

CCTV footage was played in court that showed Mr Puri being told repeatedly to remove his turban, despite the presence of scanning equipment that could have been used without Mr Puri having to take off his headgear.

Mr Puri claims he is the victim of discrimination by individual border guards after he wrote to the head office of the Straż Graniczna following an incident in October 2009 when Puri, a frequent traveller to Poland, was forced to remove his turban after the Polish Border Guard adopted stricter security policies in airports.

On September 20, 2010, ten days after the launch of Mr Puri's court case, he was asked to exit the queue for his flight and, after he refused to do so, was charged with obstructing the work of the Straż Graniczna.

The case went to court, but the courts questioned the constitutionality of the guards' actions and the outcome is pending.

Individuals identifying themselves as members of the Straż Graniczna have been writing about Mr Puri's case on the Internet forum of the Staff Association of the Polish Border Guards (www.nszzfsg.org.pl).

"They have been hurling insults and abuse at Sikhs and also at me personally. I feel particularly outraged that a public service can have such a personalised discussion about an individual," said Mr Puri.

"The public services in Poland must understand that their job is to serve the public and not to intimidate, harass and insult them. Poland is a tolerant, educated and cultured country yet some elements in society are lost in the new Poland," he continued.

A British Sikh, Mr Puri's religion is opposed to the removal of the turban in public or to allowing strangers to touch the fabric. For Sikhs, the turban is a religious requirement and being forced to remove it is a source of shame.

Changes to EU airport security regulations in 2010 caused controversy because they allowed for hand searching of religious headgear. New regulations issued by the British Department for Transport in February 2011 allow individuals to refuse hand searches of religious headgear as long as they submit to screening by security technology. Last summer Italian courts decided Sikhs would no longer be asked to remove their turbans during airport security checks.

With Euro 2012 fast approaching, initiatives are mushrooming across Poland to challenge racial stereotypes and attract more tourists to bolster the Polish economy.

According to Adam Giersz, Polish Minister for Sports, Euro 2012 is expected to bring in the equivalent of two per cent of Poland's gross domestic product for the period 2008–20 and should bring an influx of international visitors.

Last year the Mayor of Krakow led a trade delegation to India to attract investment and to promote cultural relations between the cities of Hyderabad and Krakow – an initiative that could lead to many Sikhs visiting the city for business and cultural reasons.

Mr Puri feels that serious changes are necessary to facilitate this: "Several Sikh businessmen and priests have come to me saying they have all being treated in this insulting and demeaning manner. Everybody complained but, because they don't speak Polish or have access to any help, they have to comply."

Mr Puri's case has been called "precedent setting" by Gazeta Wyborcza and will continue on December 14. The Straż Graniczna have declined to comment on the case to the Krakow Post.

• Locog: 'We want to make sure Games are accessible to all'
• Britain has world's largest Sikh population outside India
http://www.guardian.co.uk/sport/2011/nov/21/sikhs-kirpan-london-olympics-2012 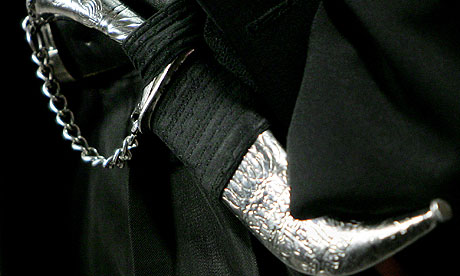 The kirpan is one of five articles of faith for Sikhs and will be allowed in the London Olympic venues. Photograph: Chris Wattie/Reuters

Sikh athletes and spectators will be allowed to wear ceremonial daggers into London Olympic venues next year, despite the intense security arrangements, as part of a multi-faith approach to the Games.

"We want to make sure the Games are accessible to everyone," a Locog spokesperson said on Monday. "The policy has been set by the Locog security team, who have liaised with wider stakeholders, and is part of our multi-faith approach.

"The kirpan will be presented at security, but it will not be unsheathed. Wearing the kirpan alongside the other articles of faith is both an every-day occurrence for Sikhs and an important part of observing their faith."

Organisers said the kirpan would have to be worn beneath clothing and Sikhs carrying one would also have to demonstrate the four other articles of their faith that they must wear at all times.

Britain has the world's largest Sikh community outside of India, with 336,000 followers recorded in a 2001 census, although Sikh community figures say the real figure is more than double that.

Organisers have recruited 193 chaplains, representing nine faiths, to assist some 17,000 athletes and officials attending the Games as well as up to 200,000 staff and volunteers and 20,000 media.

The Olympics, starting on 27 July next year, represent the biggest security challenge since the second world war for a country that remains on high alert for a terrorist attack.

The defence secretary, Philip Hammond, said this month that all necessary measures will be taken, including possibly the use of surface-to-air missiles, to defend against an airborne attack