From : Sikhs in Belgium 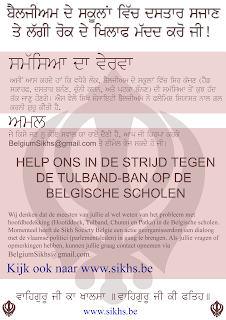 Almere Nagar Kirtan coverage ( Watch it on the web)

The Sikhs of Sint-Truiden

The Sikhs of Sint-Truiden
http://www.flanderstoday.eu/content/sikhs-sint-truiden
A Limburg town is tackling the issues of multi-culturalism head on by bringing its secondary school students face-to-face with cultures who call the region home

It was 1972 when the first Sikhs arrived in Flanders. All male political refugees, they had been expelled from Uganda by Idi Amin. Many more arrived in 1984, fleeing India after the bloody June massacre of scores of followers of Sikhism by Indian troops at the Golden Temple in Amritsar.

The storming of the Golden Temple followed weeks of growing tension between the government of Prime Minister Indira Gandhi and Sikhs in Punjab, who believed they were being discriminated against by the Hindu majority. A consequence of the massacre was the assassination of Gandhi herself later the same year by two Sikh bodyguards. Anti-Sikh riots followed, leading to their emigration in large numbers.

Apart from a few exceptions, the Sikhs arriving in Flanders were mainly poorly educated labourers. Accustomed to working in the fields, they soon found employment in the agriculture sector, particularly in Limburg where they worked on the many fruit farms in the Haspengouw region.

Some showed more of a commercial aptitude, and their night shops and DVD rental outlets were readily patronised by the locals. It wasn't long before the Sikh men brought families over from the Punjab region and established what are now thriving Sikh communities.

There are currently about 8,000 Sikhs in Flanders, with a particular concentration in the Limburg town of Sint-Truiden. In 1993 in Halmaal, on the outskirts of Sint-Truiden, a former farmhouse was converted into a Sikh temple: Gurdwara Sangat Sahib.

The Gurdwara (a Punjabi word meaning house of worship) is the focal point for the large Sikh community in Sint-Truiden, which swells to over 1,000 during the fruitpicking season. Here they come together to pray, read from the holy book (the Goeroe Granth Sahib), celebrate births and weddings and enjoy a communal meal every Sunday.

In the Gurdwara in Halmaal, thick carpets cover the floor; the roof and walls are decorated with orange and red garlands; and the Goeroe Granth Sahib is given a prominent position on a raised platform covered by an ornately decorated canopy. People of all – or no – religious faith are welcome in Gurdwara Sangat Sahib. Before entering, visitors must remove their shoes and socks and cover their head with one of the orange scarves provided at the door.

Of course, it hasn't always been easy. Soon after the Gurdwara was established in Halmaal, Sikh agricultural workers reported being repeatedly harassed and intimidated. A house where 10 Sikhs lived was damaged by a fire-bomb, and a Sikh was shot in the arm.

In recent years, efforts have been made from both the Sikh community and local government towards greater integration and understanding. Louke Bamps regularly puts this into practice. A former council worker involved in helping political refugees, she has come to know and love the Sikh community and to follow their lifestyle and beliefs to some degree. She is also a fount of knowledge on Sikhism and regularly gives guided tours around Gurdwara Sangat Sahib, including an introduction to Sikhism.

"The Sikhs in Limburg are very peaceful, tolerant and respectful," says Bamps. "Many of them have become proficient in Dutch, and a lot of Sikh families have had children in recent years, who are becoming well integrated in the schools. What's more, Sikhs make an important contribution to the economy of Limburg, thanks to their willingness to work hard on farms and in factories and in the shops they have established."

Bamps is involved with Hapje Sint-Truiden, a brand-new project focusing on diversity and tolerance aimed at students in the first year of secondary schools. It's a joint initiative between Djapo, an NGO that strives to encourage world citizenship and sustainable development in the classroom, and the Integration Department of Sint- Truiden.

"It's an important and very useful initiative," says Sint-Truiden mayor Ludwig Vandenhove. "Its objective is to give pupils between 12 and 13 a taste of other cultures in Sint-Truiden. Children from various local schools will be spending significant time with four of our local communities: Moroccans, Nepalese, Sikhs and Ahmadiyya Muslims from Pakistan."

In the temple of the Sikh

Last month, it was the turn of 20 children from the Zonnegroen School in Zoutleeuw (plus one reporter) to visit the Gurdwara Sangat Sahib in Halmaal. Once the students had overcome their initial embarrassment of having to remove their shoes and wear scarves, it was a great success.

Food, of course, is always a good way to break down those cultural barriers. We were all warmly welcomed with masala chai (a sweet, spiced milk-based tea) and pakoras (vegetables like onion, cauliflower and potato, fried in a flour batter). The children then sat surprisingly quietly in the temple and listened to Bamps give an overview of Sikhism. This was followed by a group of Sikhs playing traditional Indian instruments and singing songs in Punjabi.

Then it was time for lunch, and we all sat cross-legged on carpets to enjoy a typical Punjabi meal. There were a few anxious faces when the first exotic-looking ladles of dahl (thick lentil stew) and sabzi (vegetables with homemade cheese) were served. However, once it was realised that the food was not too spicy, the rice marvellously scented and the raita (yogurt and mint) very tasty, appetites returned and many of the children were happy to accept second helpings (particularly of the pancake-like chapattis).

The mayor also popped in to see how the event was going. He answered the children's questions and emphasized the need for integration and tolerance among the different communities in Sint-Truiden: "I am very pleased to see the project progressing successfully. It shows that it is worth taking the effort to understand different cultures and faiths. And sharing a meal is one of the best ways to break down barriers and prejudices. With this project, Sint-Truiden is taking an important lead in the area of multi-cultural integration in Flanders."

Sikhism in a nutshell

• Founded by Shri Guru Nanak Dev Ji (1469-1538) after receiving a vision to preach the way to enlightenment and God
• The goal of every Sikh is to build a close, loving relationship with God – a single, formless God with many names, who can be known through meditation
• Belief centres around samsara (the repetitive cycle of birth, life and death), karma (the accumulated sum of one's good and bad deeds) and reincarnation
• Sikhism rejects the caste system of the Hindu religion. Everyone has equal status in the eyes of God
• Sikh males share the name "Singh" (lion), and Sikh women "Kaur" (princess)
• The Five Ks are clothing practices followed by stricter Sikhs:

Flanders is becoming increasingly multi-cultural, so Flanders Today is setting out to discover some of the more out-of-the-way cultures in the region in a four-part series. Check the first issue of every month.

Below are the noteworthy statements. However it is good that you watch this entire video.