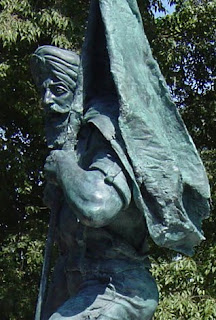 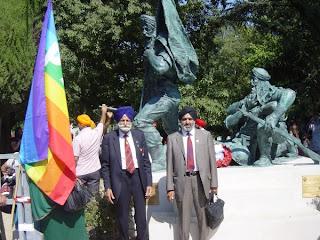 Forli, Italy : On Saturday 13 August, 2011, Sikhs from across the diaspora gathered at the Forli War Cemetery in Italy to inaugurate the first military monument dedicated to the the Sikh warriors who laid down their lives in World War II for the freedom of Europe.

For the liberation of Italy, 5773 British-Indian Soldiers laid down their lives in Italy, of which the majority were Sikhs. Besides Forly, Sikhs also fought in Cassino, Florence, Ravana and Sangro River during World War II.

Both the Montecchio Precalcino Communal Cemetery and the Taranto Town Cemetery Extension also have Samaadhs of a Sikh soldier each on their hallowed grounds.

Dignitaries from Punjab, Europe and across the diaspora graced the occasion of the unveiling of the memorial.  The Sikh Sangat and Gurdwaras of Italy joined hands with the Town Hall of Forli to make it a resounding success.

Paul Breyne, Governor of West Vlanderen, the province in which Sikhs fought and defended during World War I; Luc Dehaene, Mayor of Ieper, the city which was defended by the Sikhs and where Chlorine was used in chemical warfare against them, in April 1915; David Symons, Director of Communication & Information, Commonwealth War Graves Commission, who mantain all the memorials and Cemeteries of World War I & II in 50 countries; joinded many of our own community leaders on the day.

Stefan Popdimitrov, the sculptor who created the magnificent monument, also attended the ceremony with his wife.

The whole event was transmitted live by the SikhTV and Sangat TV channels.

A Diwan was held in a nearby marquee on the Forli Cemetery grounds. Amongst those honoured included some Italian soldiers who fought alongside Sikh soldiers. Amongst them was a doctor who had tended to the wounded Sikh soldiers. The Mayor of Forly was honored for his tireless service in makingb the memorial possible. Guru ka langar was served..

Finally,  an open air Sikh martial-arts show was performed by the highly decorated team of Sikhs from Italy.

The following day, on Sunday, the Gurdwara Sangat Sabha in Terranuova, Arezzo, hosted the guests who had come from far and wide. One of us (Bhupinder Singh Holland) addressed the congregation and shared stories of the Sikh involvement in World War I and ll, reminding all that in the two wars, 83,005 turban-wearing Sikh soldiers made the supreme sacrifie, while a further 109,045 of them were wounded.

The plaque on the monument we left behind, placed by the Sikh Community of Italy, carries a quote from Sir Winston Churchill: "We are today able to live with honour, dignity and independence. In the war, they fought and died for us, wearing the turbans'.

In the words of General Sir Frank Messervy, K.C.S.I., K.B.E., C.B., D.S.O., "Finally we that live on can never forget those comrades who, in giving their lives, gave so much that are great and good to the story of the Sikh Regiment. No living glory can transcend that of their supreme sacrifice. May they rest in peace."


Sangat TV, a Birmingham-based channel mainly in Punjabi, has emerged as the unlikely hero of the ongoing unrest in Britain with live coverage of events including showing its correspondents helping the police tackle rioters.

Indian-origin presenter Upinder Randhawa's sensitive coverage in which he expresses his own disgust at the rioting in Birmingham, captured the imagination of viewers in Birmingham and beyond.

Major broadcasters such as BBC and Sky News have been carrying Sangat TV feeds prominently, while viewers have expressed much appreciation of its live coverage driven by the objective of ensuring normalcy returns to the streets of Birmingham.

Launched in September 2010, the channel is owned by charity organisation Sangat Trust and is supported by donations from gurdwaras and individuals across the UK.

Most of its programming is in Punjabi and includes gurbani and educational programming.

Paul Uppal, the Indian-origin Conservative MP from Wolverhampton South West, hailed the channel's coverage, and said it was 'extraordinary' that its crews were giving lifts and extending help to the police to carry out its duties.

"It is extraordinary that TV crews have been helping police but it is also incredibly uplifting. It shows how much they care about their neighbourhood, their city, their community," he added.

Media commentator Josh Halliday wrote in The Guardian that "While broadcasting Goliaths such as Sky News and ITN have flown in big-name presenters to riot-stricken cities across England, a couple of Sikh men armed with a point-and-shoot camera have stolen the headlines."

"Sangat TV, a four-man operation in a makeshift newsroom in Edgbaston, Birmingham, has had a good riot. Its guerrilla journalism, mostly broadcast live using a handheld camera, has been rebroadcast by CNN, the BBC and media outlets in India," Josh added.

Ranbir Singh Attwal, the 50-year-old community leader behind the channel, is delighted with the attention the channel has received.

The channel's mission is to "spread peace, defend our faiths and educate people," Attwal said adding, "We've done coverage before but only small events in the local Sikh community."

He said that it's about informing people and then all joining together against the criminal element.

"The whole community can outnumber any bad or evil, even if the gangsters outnumber the police. You can only win people with love," he added.

The channel's best moment, described as 'most jaw-dropping moment' was on Tuesday night, while it filmed from a car, a police pursuit of young rioters down a Birmingham backstreet.

With police lagging far behind, Sangat presenter Upinder Randhawa shouted to the officers, "Do you need a lift? We'll give you a lift. Get in the car". Twenty seconds later the rioters were arrested.

Hours earlier, he had been close to tears on air while filming a group of distraught Muslim men who had come to know about the death of their friend.

Jit Singh of Sangat TV said, "What we try to do is to actually save the community, to save their values, their shops, by informing them."