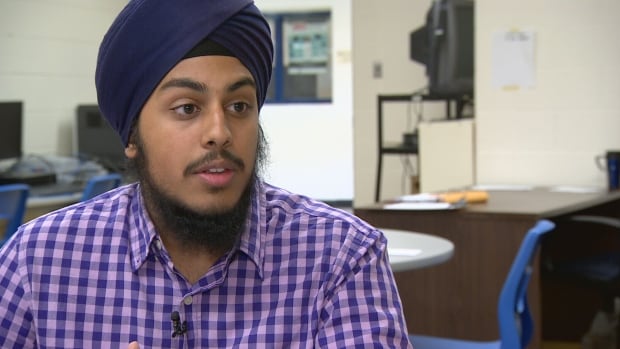 Gurujot Singh, a student at North Park Secondary in Brampton, is working on an app that would make banking more accessible to people in developing countries.

While his fellow students are intensely focused on earning good grades and getting ahead, Gurujot Singh is thinking about how he can improve people's lives a few continents away.

The 17-year-old North Park Secondary School student conceptualized a phone app that would offer virtual financial services to India's poor and presented his idea at the J7 Summit in Germany last May.

The summit is an opportunity for young people aged 14 to 18 to meet with other youth delegates from G7 countries and talk about issues such as fair trade, health, the fight against poverty and women's rights.

'There's something about him that people know he's going places and he's going to take everybody with him.' - Miriam Mirza, Gurujot Singh's teacher

Six students from North Park represented Canada at the summit, and Singh met with German Chancellor Angela Merkel at the event.

"It's probably the most amazing thing I've done," Singh said. "She really supported the idea of micro-financing and talked about how it's the future because not everybody in those countries has those resources, but people in developed countries have an abundance so it's about taking that abundance and sharing it with the rest of the world."

Singh told CBC News he'd like to apply the concepts he's learning in one of his courses on the world stage.

"I'm taking an economic course and it's talking about equity and scarcity, and how people in developing countries don't have the same resources as people in developed countries," he said. "I have family in India and they don't get the same benefits as we do so I wanted to provide these benefits to them."

"He's a genius when it comes to computer programming, he has incredible business sense, he's heavily involved in our social justice club and he's one of the happiest kids I've ever met," Brown told CBC.

"There's something about him that people know he's going places and he's going to take everybody with him," she said.

Singh, who'd like to pursue economics and law in university, says he plans on working on his app "for his entire life."

"At the end of the day, it's about our footprint," he said. "It's what we do to make a difference in the world. When we want to be remembered, it's not because you had a great job — it's because you made an impact on everyone else in the world."

This story is part 1 in a CBC News series about amazing teens from the Greater Toronto Area.